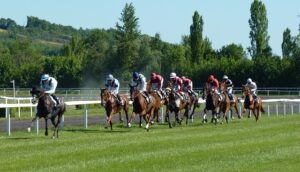 The Grand National tournament is arguably the most exciting horse race in the annual racing calendar. The fence presents a bigger challenge than other races in the UK, and the distances pose an endurance test to even tough horses.

For horse racing punters, the Grand National 888Sport offers the best odds from this April event. Besides the exciting betting opportunities the tournament presents, it offers some amazing moments worth watching. Here are the three most memorable Grand National moments in history.

The Fall of Devon Loch

The 1956 Grand National went down in history books as one of the most memorable horse racing moments of all time. Devon Loch was in the blink of winning this prestigious race but failed in the end. Riding the Queen Mother’s horse, Devon Loch fell and landed on his belly only a few yards to the winning post on the last final straight.

While Dick Francis attempted to cajole the horse, Loch could not finish the race. Much to the anguish of the hopeful jockey, ESB claimed the prize. The Queen Mother said that’s the nature of racing after the disappointment, although many theories floated around in an attempt to understand Lock’s strange behavior that day. However, nobody truly knows why the horse reacted that way at the Aintree racecourse.

How many racehorses can boast of claiming a historic win as they were the slowest in every competition of the day? Probably none, but Foinavon. The Irish racehorse won the 1967 Grand National despite being the outright underdog with pre-race odds of 100/1. In fact, both the horse owner and trainer weren’t in the stands during the race day.

Under normal circumstances, Foinavon stood no chance of winning, but this Grand National event yielded an unusual incident that gave him an excellent chance. Popham Down veered to his right during the 23rd fence and caused a huge pile-up, and most horses in the race were pulled down by it.

Being the slowest in the race, Foinavon could easily evade the chaos since he was lagging a little behind the others. He soon established a solid 309-lengtgh lead with only six fences left in the race. Many horses tried to make a comeback in the race, but that was in vain. Foinavon easily rode through the winning post with a huge margin.

Red Rum is among the greatest names in UK’s horse racing history. Although he didn’t have a great start, trainer Ginger McCain believed in his ability and started training the horse on the sand. However, his first major victory was recorded in 1973 during the Grand National.

This win was quite memorable as his arch-rival, Crisp, led the race all the way and even took charge at one point with a whopping 30 lengths. By the last fence, Crisp was 15 lengths ahead of Red Rum. However, Red Rum didn’t give up. Instead, he came with a thundering speed, making up the difference during the final stretch.

The Ginger McCain-trained racer managed to outrank Crisp by ¾ of a length. The race is often considered among Grand National history’s closest and most exciting victory.

Cheltenham 2021 off to cracking start with impressive Appreciate It #Cheltenham https://t.co/bnOAhb4a0g pic.twitter.com/delujO6127

No horse put more distance between themselves and their rivals at the Cheltenham Festival come the finish line this year than Appreciate It.

He gave the premier National Hunt horse racing meeting’s winningest handler and multiple Irish champion jumps trainer Willie Mullins a seventh success in its opening race, which also opened the floodgates for the Emerald Isle. The tide swept almost all British horses away and powerful domestic stables like those of Ditcheat maestro Paul Nicholls and Dan Skelton went without any victories.

This trend continued into the Grand National meeting and in the world’s most famous steeplechase itself. Each of the first five home in the Aintree showpiece, and all but three of 15 finishers were trained in Ireland.

Besides being the winner of the Supreme Novices’ Hurdle at the Cheltenham Festival day 1, Appreciate It landed two Grade 1 races at Leopardstown on his side of the Irish Sea earlier in the season. Whatever happens at Punchestown at the end of the campaign, this is a seemingly seriously smart horse on paper based on his results going forward.

A modern record margin of 24 lengths for Supreme success, if taken literally, suggests Appreciate It is a horse with the world at his feet. Closer scrutiny of his form may give a different impression, however. Appreciate It was sent off odds-on for three of his first four hurdles starts, so the market thought there wasn’t much in the way of opposition.

The two-mile novice hurdle division has been particularly weak this jumps season, then. Repeat victories over previous Grade 1 winner Ballyadam showed the superiority of Appreciate It, but there was a big chance for his rival to advertise that form when stepped up in trip at Aintree.

What happened instead was Ballyadam flopped, further denting the value of the Supreme. Appreciate It faced the smallest field in the race’s history with just seven rivals in total. The third home, For Pleasure, is a keen sort who also bombed out during the Grand National Festival.

There was also a final flight faller, Appreciate It’s stable companion Blue Lord, in the Supreme which may mean his comprehensive victory flatters him slightly. Nonetheless, bookmakers make him the early favourite for next year’s Arkle over fences. He is also prominent in the betting on the Marsh Novices’ Chase and could do no more than beat the horses put up against him.

Wins in an Irish point-to-point and in various National Hunt Flat races, plus second in the Champion Bumper, earlier in his career mean Appreciate It is clearly quite a versatile horse. Some of his prospective Arkle rivals could certainly be campaigned over longer trips if switching to fences, and you could also say the same about him.

Mullins initially had novice chasing in mind for Appreciate It long-term. Whether his exploits over the smaller obstacles could force his master trainer into a rethink and tilt at the Champion Hurdle next season remains to be seen. If tackling the Cheltenham Festival opening day feature, Appreciate It may end up against the formidable and currently unbeaten Henry De Bromhead trained mare Honeysuckle sooner or later.

Before this year, Irish trainer Henry de Bromhead was arguably best known for his successes with Sizing Europe. With a victory in the 2010 Arkle Challenge Trophy, he was the horse that landed the 48-year-old his maiden Cheltenham Festival triumph, and he followed that up with a win in the Queen Mother Champion Chase back at Prestbury Park in 2011.

From there, wins were few and far between for de Bromhead at Cheltenham, especially in the big outings with only Special Tiara winning a feature race, the 2017 Champion Chase, in the decade between 2011 and 2021. However, this year, the County Waterford-based trainer has taken the sport by storm and in the last couple of months alone, he has made history on numerous occasions.

That includes becoming the first trainer to win National Hunt racing’s big four races in the same year. So, without further ado, lets take a look at his historic quadruple.

Given that Honeysuckle went into the Champion Hurdle, day one’s feature race, unbeaten in 10 races, it’s no surprise that the mare was heavily backed on the online sports betting sites, and she duly delivered for de Bromhead. With fellow history maker Rachael Blackmore in the saddle, Honeysuckle went on to beat Willie Mullins-trained Sharjah by over six lengths with defending champion Epatante lagging some nine-and-a-half lengths behind in third.

Despite boasting over 70 wins at the Festival, Mullins is yet to win the Champion Chase. Odds-on favourite Chacun Pour Soi (8/13) was expected to end that drought this year. However, Aidan Coleman and Put The Kettle On had other ideas. It was an extremely tight race and the drama heightened with several horses in contention as they raced up the home straight. In the end, it was Put The Kettle On, who set off at 17/2, who landed a narrow victory, beating Nube Negra over the line by just half a length. The market leader was just a further length behind.

Given de Bromhead’s and Blackmore’s week in the build-up to the Gold Cup, it seemed if anyone was going to deny Al Boum Photo an historic third successive victory in the showpiece race it would be A Plus Tard. However, it was the trainer’s much less fancied entry Minella Indo who prevailed. Blackmore is the horse’s regular rider, but with the 31-year-old opting to ride A Plus Tard, Jack Kennedy was sworn in for the race, and the 21-year-old guided the 9/1 shot over the line a length-and-a-quarter clear of Blackmore. On top of the impressive 1-2 in the Gold Cup, de Bromhead became the first trainer to win the three races in the same year at the Festival.

Just when you thought a 1-2 in the Gold Cup couldn’t be topped, de Bromhead landed the same feat in the recent Grand National. Minella Times lined up for starter’s orders amongst the front runners at around 9/1, and the whole nation would have been on their feet cheering as Blackmore and the eight-year-old romped over the line, as she became the first female jockey to win the prestigious race in the process. Behind her was fellow de Bromhead-trained horse Balko Des Flos (100/1) and jockey Coleman.

There are of course many champions of racing. Just yesterday we saw the shock retirement of Four-time champion jump jockey Richard Johnson – a man who amassed a mind boggling 3500+ career wins and was much loved and respected by all in racing. Despite of all those wins though, and two Cheltenham Gold Cup victories, a Grand National win eluded him. Does that make him any less of a champion though? Of course not.

I feel similarly about Katie Walsh. In the above Betway Racing video Walsh explains not only how she holds the women’s record for placing third in the Grand National in 2012 (and has ridden three winners at the Cheltenham Festival), but also details the hard fought efforts across decades to carve out a place for women in racing. For me, her ‘champion’ status clearly also involves championing the well overdo recognition of woman in the sport, and in the Grand National itself. In this years Aintree Grand National three women take part (a joint record), and I’m sure that it’s only a matter of time before one of them is first past the post. Tune in on April 10th!